A downloadable game for Windows, macOS, and Linux

What if you're so obsessed with Vampires that you wholeheartedly believe
them to exist in real life and you've made it your life goal to prove their existence to the world?
This is the case for 19 year old Cherise. Having been obsessed with vampires for years she spends most of her time reading vampire themed books, thinking of theories to prove their existence and most importantly; being on the outlook to find one!
The latter has been rather unsuccessful — that is until Cherise finds Dalton and Aleisha, two people who make her 'Vampire sensor' overheat. Being full of excitement and hope she makes it her next mission to get close to them and prove once and for all that she isn't crazy like most people believe her to be.

In Genjitsukai you get the option to choose a route at the beginning and this will change the story you'll get completely;

In this route Cherise has recently spotted a (inhumanly!) handsome guy who
made her Vampire senses flare up immediately. With the sudden gut feeling she had to follow him, she chased him around for at least 30 minutes until he suddenly sensed her from a pretty big distance — this only being a confirmation to her that he is, indeed, something special. She tried to follow him home, but frustratingly enough ended up losing him somewhere along the road.
But then, a week or so later, she meets him again at the same shopping district. And this time she is fully determined not to lose him again.

In this route Cherise meets a strange girl at her favourite bookstore, who makes a sudden remark on the specific books Cherise is carrying at the moment. Being offended by her description of it being "unrealistic" and "a pain to get through" — especially once the girl pointed out Cherise her favourite book of all time — she waves her opinions off and continues her way, but then suddenly it hits her that the way the girl pointed it out was rather suspicious.
Suddenly being triggered by a form of excitement and curiosity she decides to go back and talk to the girl, only to find out that she is long gone.
Then she made a promise to herself that, if she were to ever see her again she'd make it a proper discussion and try to figure out whether this girl was a vampire fanatic like herself or perhaps the key to finding out a truth she has always hoped for.

We're glad to finally be able to share this game with you that we've worked so very hard on in the past month. KagiProjects had the wish to participate in NaNoRenO for a few years and we've finally been able to do so.

Of course we would have liked to make this game more complex, but with lack of time we decided that a more simple game would be nice for NaNoRenO.

We'd like to update this one day, but this won't be anytime soon.

Feel free to leave comments below with your thoughts of the game and we hope you'll enjoy this short experience.

Does anyone need a walkthough because I need one for real life and every game XD Seriously is there a walkthough for this game?

You can find the walkthrough here :)

Yeah... Alisha is adorable and cute... and smart... and she has even more advantages.

Art style of game is of course good too.

I really like the story. About love, understanding each other and accepting all the defects. Very beatufil and romantic ♥ ♥ ♥ ♥

Aleisha is so sweet and adorable, I loved her route, thank you very much for doing this game !

We're glad you've liked her route. Thank you for playing our game!

This game is GREAT! I've only played Aleisha's route because I had my eyes on this route since the beginning and I can only say that the good ending was really cute. I was worried at the beginning that Cherise would annoyed me but I find that her passion for vampire was credible and I really loved her. Plus, I liked the explanation about vampire nature, it's change of what we're used to see.

Thanks you so much for making this game!

Aww, thank you so much. The compliment about Cherise and the explanation about vampire nature means a lot to me. Thank YOU for playing and liking it!

Thank you :3 We hope you enjoy his route as much as his design~~

this game is awesome but i keep getting dalton bad end any tips on how to get his good end?

Thank you for liking and playing our game :) I've made a playthrough for everyone who gets stuck with getting the desired endings. You can read it here: Genjitsukai Playthrough

okay thank you soo much keep up the great work

No problem :) and thank you!

Very fun game, Aleisha's route put the kind of grin on my face that I don't want to have but just can't shake off because the two of them are just too adorable together. So much blush ///. Dalton a bit less because the flirting badboy is never really that much to my taste but his good end was still nice. I was kinda rooting for Dalton to be a regular human all along or a different kind of mythical creature (There's no such thing as vampires, silly. I'm a fairy, see?) just for the anticlimactic reaction that Cherise would've had on it.

Aww! Thank you so much. I'm glad you liked Aleisha's route so much. It's true that they are very adorable : ) Haha, that's alright. Everyone has their own tastes. I LOVE that idea about the fairy - I wish I would have thought of it. It's true that I (as the writer) do wish to one day make a fairy game so I laughed when I read that. The "good ends" are actually also the TRUE ends of the games. Thank you for playing our game and commenting ^^

omg!! i love this game!! i wish it was longer!! but amazing job!! keep the games going im waiting for more!!!

Hey! Thank you for showing interest in our games, we appreciate it! : ) I'm glad you've enjoyed the game and I'm sorry that it wasn't as long as you wished for. I can promise that Secrets will definitely be longer than Genjitsukai.

oh yes i am waiting for that one tooo!!

hahha i already played it and i love it tooo!! for a long time i tried to download but saw the post of you putting it back on!! lol 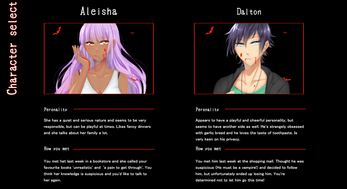 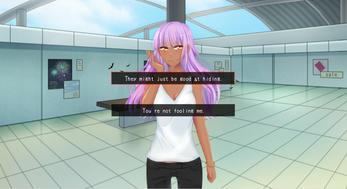 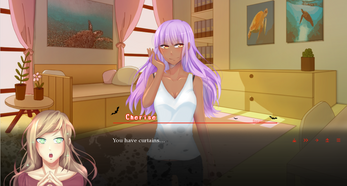 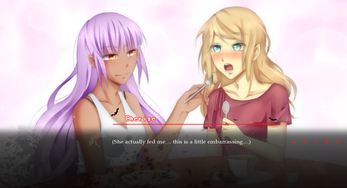 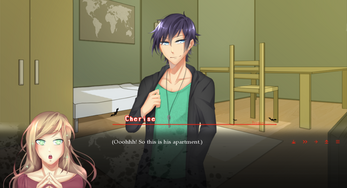 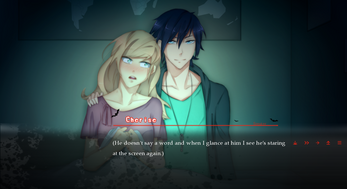